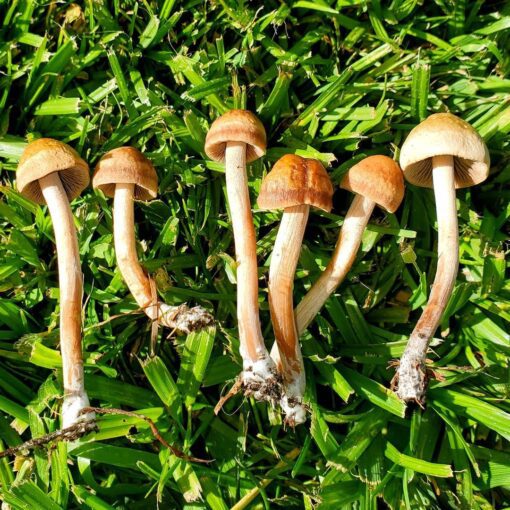 During the early 1900s. These species were referred to as the “weed Panaeolus” because they were commonly found in beds of the commercially grown. Grocery-store mushroom Agaricus bisporus. Mushroom farmers had to weed it out from the edible mushrooms because of its hallucinogenic properties.

Cap: (1.5)2 — 5(5.5) cm (0.59–2.17 in), hemispherical to convex when young to broadly umbonate or plane in age, smooth, hygrophanous, striking cinnamon-brown when moist, soot-black when wet which disappears as the mushroom completely dries out. The flesh is cinnamon-brown to cream-colored and thin.

Stipe: (2)3.5 — 8(10) cm long, (2)3 — 7(9) mm thick, equal or tapered at the ends, reddish brown to whitish, pruinose, hollow, no veil remnants, longitudinally white-fibrillose and white-powdered, striate at the apex or twisting vertically down the entire length of the stipe, Stem base and mycelium occasionally staining blue.

Taste: Farinaceous (like flour) when fresh, saliferous (salty) when dried.

Morphologically, Buy Panaeolus cinctulus can be easily confused with other species of psilocybin mushrooms. They have a resemblance to Panaeolus fimicola, and prefer the same habitats, but the latter species has sulphidia on the gill faces.

There are no reviews yet.

Be the first to review “Panaeolus Cinctulus” Cancel reply